You can read reviews from riders who have visited Pure Mountains on Google, Facebook and TripAdvisor.

This online guide is all about discovering the best of Granada city and province. They've just published an feature called "Find out about Four Fantastic Outdoor Activity Holidays in Granada". Pure Mountains is featured, along with horse riding, hiking, climbing and  motorbike touring outfits.

We love Scottish brand, Findra. They design and male stylish, sustainable and versatile outdoor clothing for all of life’s adventures.

Jenny fom Pure Mountains featured in their February Inspiration slot. She told Findra and their loyal cutomers a bit about herself, her love of the outdoors and shared her favourite painting (Picasso's Guernica) and song (Despacito, natch!).

You can read the article here. 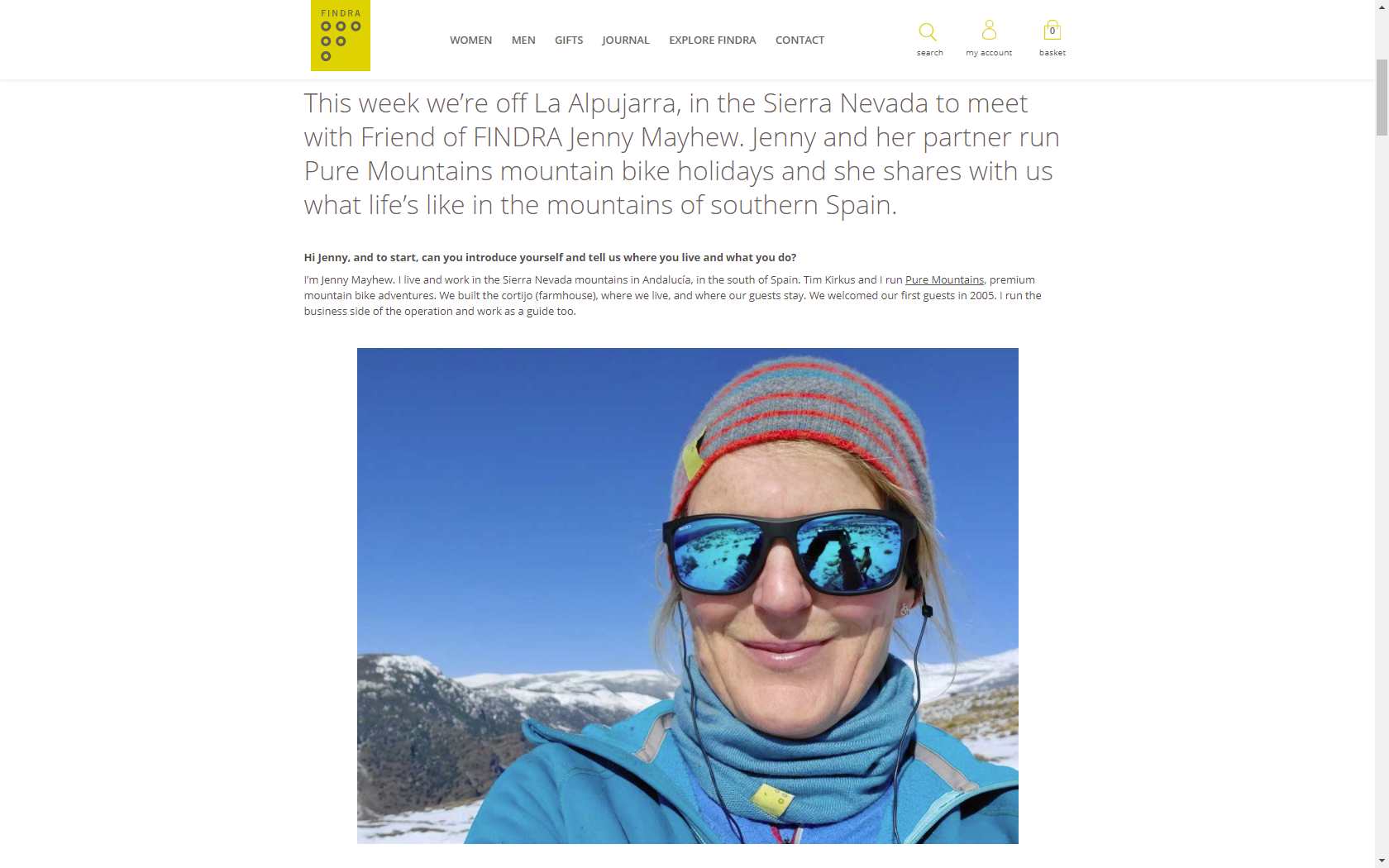 "...a veritable riding paradise...guests enjoy great, homemade food, a laid-back atmosphere, excellent wine and the wealth of singletrack outside the door."

We had a great time riding with Felix and Sarah. You can read the write-up here in English and German.

Emerald MTB is all about Mountain Biking in Ireland. It emphasises riding bikes with friends, having fun and inspiring readers to ride more and to discover new locations.

Pure Mountains was featured in their round-up of the Best Mountain Bike Holiday Destinations in Spain:

"Stay in their rustic-luxe farmhouse and enjoy home-cooked breakfasts, lunches and dinners. The typical 5-night stay mixes four days of trail and backcountry riding, starting from the front door, with challenging climbing and demanding descents."

Notable mountain bike blogger, Jessica Strange, joined one of our skills coaching trips with  Katy Curd and wrote a report on her fast-growing blog, Velo Me.

The website that covers all things of interest to female riders visited Pure Mountains in May 2015. Read their write-up here.

Sweden's Bike Academy had their "staff outing" to Pure Mountains in October 2014. They run very popular mountain bike skills courses for women in and around Stockholm.

We all had a great time and they wrote an review of their trip, which was published in Sweden's leading cycling catalogue, Cyklopedin.

Have a look here.

The Guardian included Pure Mountains in their Top 10 Cycling Holidays in Europe.

"...a few days of riding with nothing to worry about, apart from staying in one piece, is a dream for any mountain biker"

Womens' Cycling Magazine sent Lauren Jenkins on one of our female-only trips in September 2013.

Two journalists, Anna and Sissi and a photographer, Tommy, joined our Skills Coaching Trip with Neil Donoghue in Ocotober 2013. Click here to read the article they wrote for the German magazine, World of MTB (in German).

In September's feature on overseas skills courses, they reported on our skills coaching trips with Neil Donoghue, saying:

"Skills coaching at a luxury eco farmhouse in Sierra Nevada. Challenging climbing and demanding descents in the stunning wilderness of the region, along with a great mix of the best bits of cross-country, all-mountain trail riding and backcountry. Coaching, guided rides and proper swanky accommodation."

October's edition had a round-up of ideal European mountain bike destinations for autumn. Their opinion of the Sierra Nevada mountains was:

"The Sierra Nevada is a massive mountain range, offering the experienced biker technical, big-mountain riding on dry, natural trails. There are endless long climbs and rocky, switch-backing descents. This is back-country riding, with eagles for company. puremountains.com"

Here are the pages.

The Swiss mountain club magazine published an article by one of their members, Tilman Theurer, about his trip to Pure Mountains.

Read his article, as a German PDF, here.

"Q: Do you ever get bored of riding your bike?

Pure Mountains is a member of resposibletravel.com, the origial business promoting responsible and eco travel.

They recently published an interview with Jenny, co-owner of Pure Mountains, as a Member's Story on their blog. You can read the full article here.

"...about as close a mountain  biker can get to heaven within two hours' flight time from London. Old hiking and farming trails tumble down the valley in all directions."

Andy Waterman of high-end mountain bike magazine, Privateer, joined our Skills Coaching Trip with Neil Donoghue in October last year. His feature on skills coaching appeared in the latest edition of the mag, along with some gorgeous photos he took at Pure Mountains.

You can read extracts from the article below. 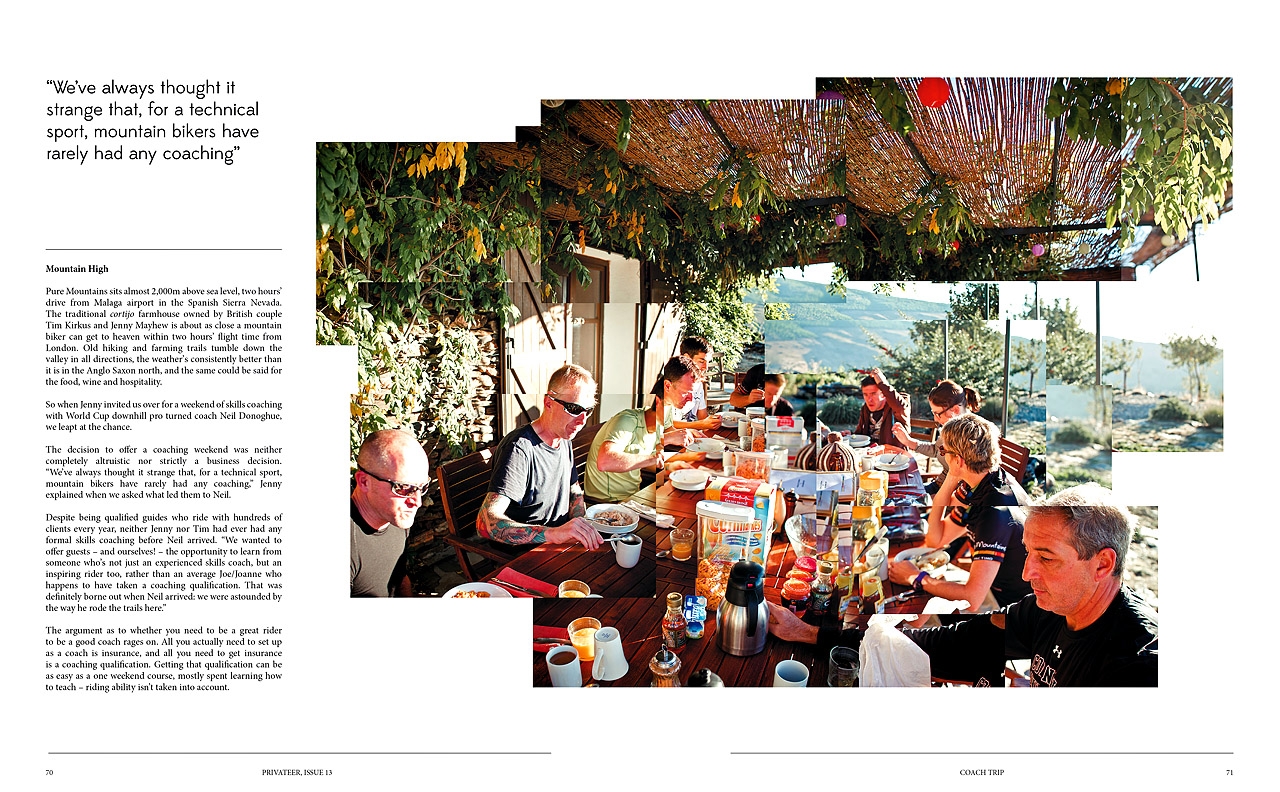 The UK's biggest mountain bike title ran a feature on winter riding. They recommended a visit to Pure Mountains, of course!

Sweden's leading mountain bike website, HappyMTB, sent a reporter to Pure Mountains in September. He had a great time. Read his full report, in Swedish, here.

"...the best four days riding I have ever experienced.."

International Mountain Bike Magazine visited us in May and had a great time. Read their thoughts and see some great photos here.

The Guardian, Been There Tip of the Day, April 2012

Privateer, the upmarket UK mountain biking magazine, featured Pure Mountains guide, Jenny, in their latest 'In the Bag' feature. See what she carries around here.

"The original tip was posted ages ago, but seems like the guys behind this company are continuing to do things right as Bob Whitmore has just updated the tip with a glowing review. On yer bikes all!"

"Pure Mountains offers cycling enthusiasts the chance to mountain bike through one of Spain’s most beautiful regions..."

"If you are after a holiday with adrenalin, relaxation, great food and company, you can't do better than this."

Pure Mountains holidays were picked for their '3 of the Best...Biking Holidays' featurette. Read the full article here.

Pure Mountains has been selected for inclusion in the ten best providers of summer activites worldwide. Read the full article here.

"The great thing about the south of Spain is obviously the weather, but the network of trails in the Sierra Nevada is second to none." - MBR magazine

Pure Mountains are thrilled to be be included in Rough Guides' new title, 'Clean Breaks: 500 New Ways to See the World'. On 2 August 2009, the Oberver's Escape supplement published the authors' favourite selection of sustainable and interesting Mediterranean holidays which included 'Cycle the Alpujarras' featuring Pure Mountains:

"Pure Mountains have spent five years scouring the land and know the best routes and places to stop for picnics - where you'll be met by a Land Rover with all the necessary supplies. Choose a harder trip and you'll be pedalling for six hours a day, negotiating rocky trails and climbing into the peaks of the Sierra Nevada above Granada. The scenery is nearly always dominated by the snowy peak of 3,497m Mulhacén."

"Pure Mountains offers biking holidays in the stunning Parque Natural de Sierra Nevada. The riding is fantastic with loads of swooping single tracks past flower-filled meadows, the scent of wild herbs in the air. The guiding is excellent, with well thought out routes tailored to the group's abilities. Tim and Jenny's patience is second to none and thanks to them I can now do switch backs! Not forgetting the luxury accommodation - their remote cortijo sits at 1,700m offering stunning views of the villages and valleys of the Alpujarras - great, hearty meals, Land Rover support, picnics en route and an amazing location. The combination of biking, accommodation, food and guiding is the best I have come across. And, at the end of the day, their sunny terrace is the perfect place for a much-deserved beer. Tim and Jenny look after you so well in every aspect of the holiday."

The Guardian chose this review by a Pure Mountains' guest as its Winning Reader's Tip in Escape on 4 July 2009.

" Cycling through the Sierra Nevada is surprisingly relaxing, when there's a support vehicle to deliver cold drinks and cakes"

"a big bed to sink into at the end of the day...someone else to organise everything from kit to maps to picnics"

The Guardian, May 2008. Read the full review of one of Pure Mountains' Easy Going holidays here.

The Daily Telegraph newspaper recommends our holidays to their readers, November 2007.

A series of three articles about Pure Mountains were recently published in Spain magazine. You can download the December 2005 , January 2006 and February 2006 articles here.